Coconut Oil - Good for you inside and out 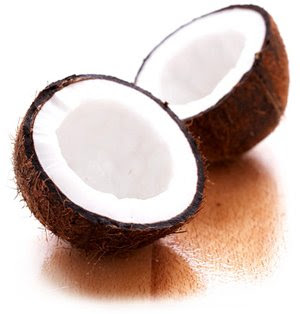 Based on recommendations from a few of our readers, I just purchased my first jar of Organic Extra Virgin Coconut Oil. I had heard that coconut oil was a great moisturizer, but once I began researching a little further, I was literally amazed by the health benefits this oil offers. Since there are tons of great posts on the benefits of coconut oil, I have picked from my favorites and compiled a list of how this amazing (and economical) oil can help you both on the inside and out.

Why should you consume coconut oil?
The benefits of consuming coconut oil can be attributed to the presence of lauric acid, capric acid and caprylic acid, and its properties such as antimicrobial, antioxidant, anti fungal, antibacterial, soothing, etc.

The human body converts lauric acid into monolaurin which is claimed to help in dealing with viruses and bacteria causing diseases such as herpes, influenza, cytomegalovirus, and even HIV. It helps in fighting harmful bacteria such as listeria monocytogenes and heliobacter pylori, and harmful protozoa such as giardia lamblia. As a result of these various health benefits of coconut oil, though its exact mechanism of action was unknown, it has been extensively used in Ayurveda, the traditional Indian medicinal system.

Coconut oil is often preferred by athletes and body builders and by those who are dieting. The reason behind this being that coconut oil contains lesser calories than other oils, its fat content is easily converted into energy and it does not lead to accumulation of fat in the heart and arteries. Coconut oil helps in boosting energy and endurance, and enhances the performance of athletes.

Health and beauty benefits of coconut oil include:


Consider how many beauty products (and containers) you could eliminate by having some coconut oil on hand. Organic virgin coconut oil can be used for all of the following:

Other fun facts about coconut oil:

More research on coconut oil can be found here.

Nice post! We've been looking into using coconut oil for our little girl. She suffers with all over eczema and we're hoping that this will help if applied to the skin as well as taken orally. Which brand have you gone for?

Thanks. I am using the Nutiva Organic Virgin Coconut Oil. I ordered it through VitaCost.com. I think I got the 54 o.z. jar for around $22. I divided it up so I could use some for cooking and some for skincare/haircare.

Thanks for reading!
Shannan

My favorite brand for coconut oil is by Wilderness Family Naturals (www.wildernessfamilynaturals.com). It's the most amazing, freshest I've had.

"My best friend has a baby and when little Marley was five months old she developed eczema all over her body. So my best friend asked me (Dr. Rachel) for a remedy for Marley's skin condition. I told her that eczema was a classic symptom of essential fatty-acid deficiency and drove her to the local Santa Barbara health food store for some hemp seed oil. I suggested my friend take the oil, since she was breast-feeding, probably had a efa deficiency herself, and I never thought Marley would take it. Well we put some in a spoon and held it out and Marley guzzled! it. My friend gave it to her everyday for three weeks and the eczema completely cleared up."

Check out ManitobaHarvest.com for more info.

Cheers to coconut oil!!! I love using it in my desserts, especially Raw vegan cheesecake :)

I spent 3 months living in Hawaii after college and I swore by Coconut Oil- it truly works to moisturize your skin and hair and smell the best! Coconut Milk is also a great product- if you heat it up, massage it into your dry hair, and wrap your head in saran wrap for 20 minutes, your hair will stay gorgeous for a week.
- Jessica
http://blog.cleaningproductsworld.com

I love coconut oil! Thanks for posting such a comprehensive list of health benefits!

Great article about coconut oil and it's potential attributes that can help keep our bodies healthy inside and out.

Been using coconut oil for my skin and hair for years already and it's really great. But I plan to change brands, though. Some of my friends recommend this: http://products.mercola.com/coconut-oil/ Has anyone ever tried if before? Any comments or suggestions?

Newer Post Older Post Home
Subscribe to: Post Comments (Atom)
This blog is for informational purposes only. Nothing in this blog is intended to replace the advice of a physician. We recommend consulting a physician before embarking on diet changes or a fitness routine. In addition, we recommend that you thoroughly research alternate points of view and make your own decisions as an informed consumer. You are ultimately responsible for your health.

If you would like to become a sponsor of Living A Whole Life or have us review your product...please email us at kheaman@wowway.com